Premium commercial versions of this antenna at Innovantennas

The OWL by G0KSC provides the benefits of both OWA (Optimised wideband Array) 50 Ohm antennas with those of traditional low impedance antennas. More information on the OWL can be found in the CONSTRUCTION menu above

Do not look at the gain figure of this antenna and compare with other 6 element 50MHz Yagis. Compare the gain, F/B and bandwidth together against other antennas of a similar boom length. With 10.32dBi and a boom less than 4M long, this antenna will be a winner for field days and the rural Ham radio operator. 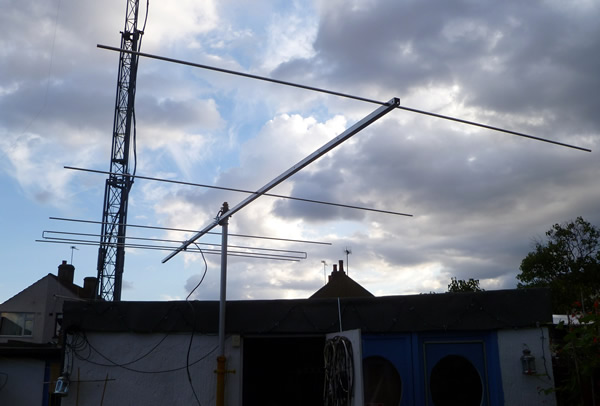 G8FJG installed a folded dipole on his 12.5 Ohm OWL to give it a 50 Ohm direct feed, feedpoint. 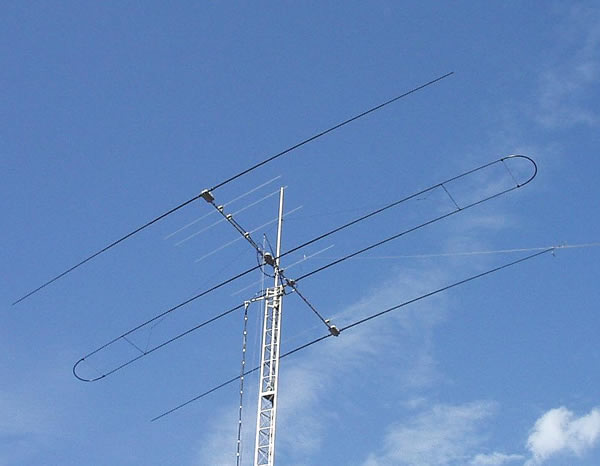 PA0WRS combined his 5el 4m long OWL onto the boom of his SteppIR. See the bottom of this page for his comments 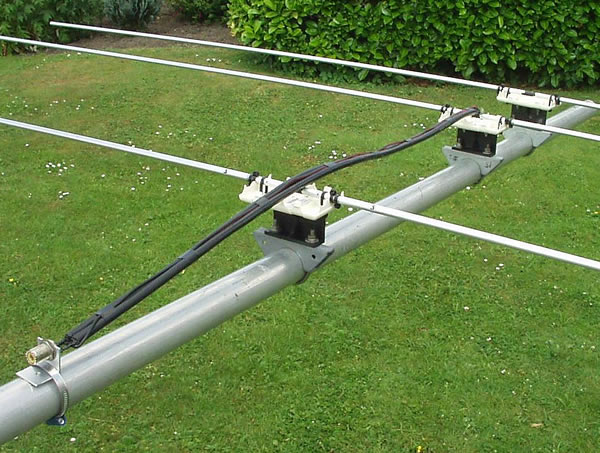 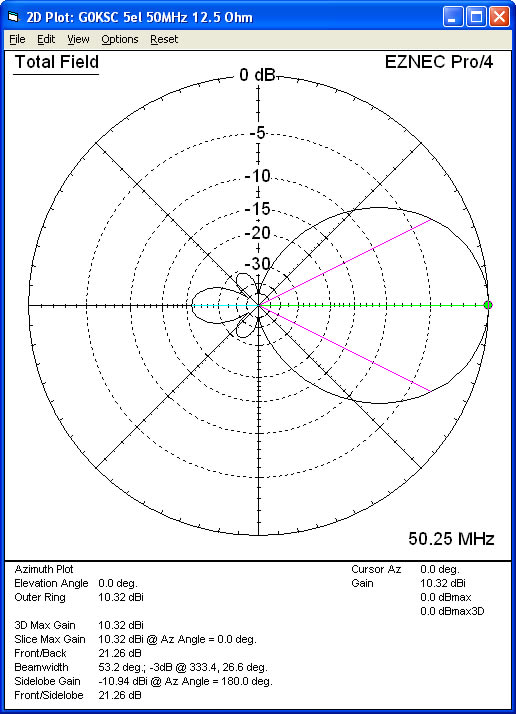 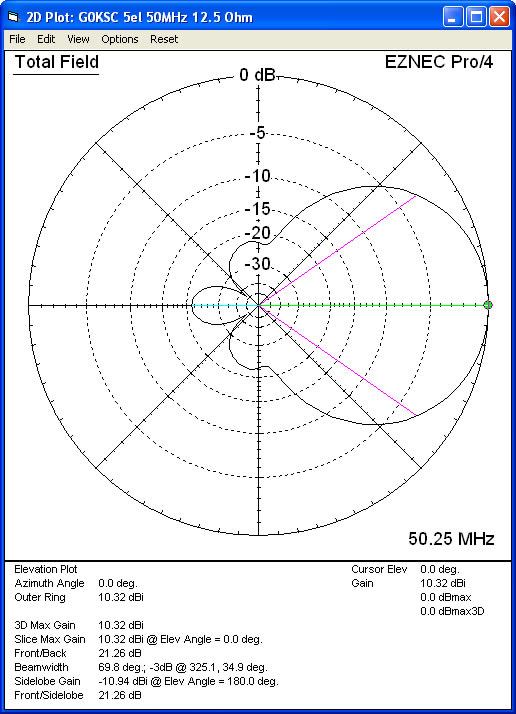 The Elevation plot is really clean too. A quiet antenna compared with most! 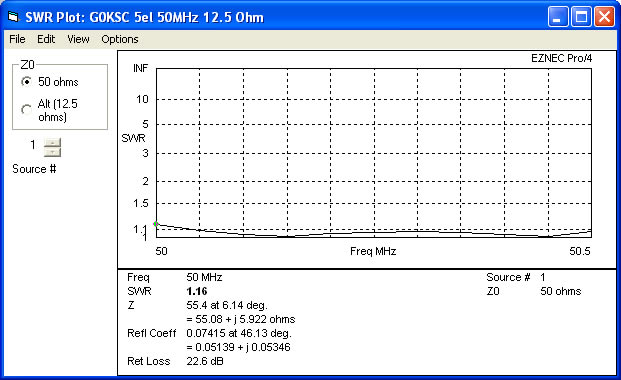 This SWR plot is taken with the Coaxial stub embedded within the EZNEC model Ever seen a 12.5 Ohm antenna like this one before? Watch how many now appear on the Internet but remember where you saw them first! 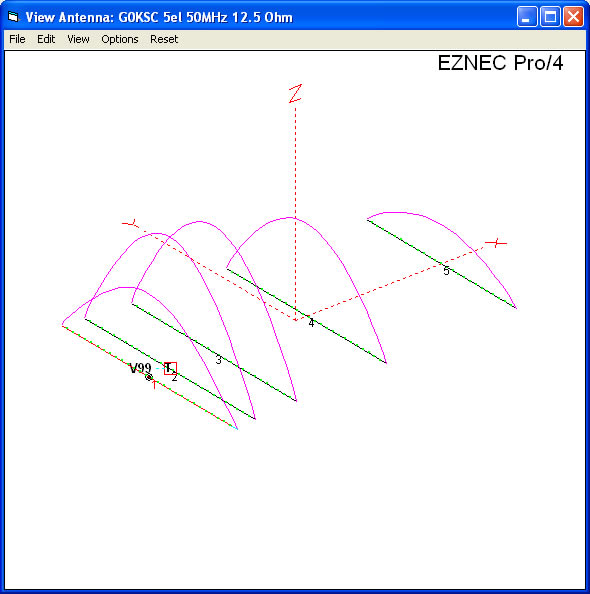 The G0KSC OWL element layout. Note the close spacing of the first 3 elements which give the OWL its extra gain and wide bandwidth.

PA0WRS had these comments on this 5el OWL build:

I like to report about a 5el 12.5 Ohm OWL yagi (according one of your models) I installed for test on the boom of my steppir beam last month.

As an ex-navy radio op I only had been qrv on HF since 1974 until I purchased a 3 el Steppir+additive director for 6m (from Ron-GW3YDX at Vine) in 2004. I did not have any 6m equipment at that time, but the Steppir went from 20 - 6 meters. In 2005 I bought a 2nd hand TS60 on 2dehands.nl (ebay equivalent in PA-land). Being an HF dxer I hoped to work some extra entities on 6m for my DXCC-Challenge. In 2008 I completed to work 100 dxcc's with this setup. I then replaced the TS60 with a FT2000d which has 50MHz on board. So I picked up a lot of entities with the steppir, but I got the feeling the F/B ratio could be better so the idea came up to add a dedicated 6m beam above the Steppir. Building this beam (6el) it became clear to me that the whole construction (Steppir + 6el beam) became to big, in the meantime since 2004 I already had extended the steppir with 30/40m trombone element, so .... Then I came to the idea to install a dedicated 5 el yagi on the boom of the steppir. In my mind when steppir elements were retracted this should work.

So after I worked the C56E dxpedition I installed the 5 elements on the Steppir boom, diameter of the elements is 10mm. Figures on YO are looking good, not much difference with 12mm diameter. I had tested it in the backyard at 2m high on a Fritzel boom I had in stock. I had some Fritzel insulators in stock and mounted junkbox covers on them on which the elements are fitted with heavy tiewraps. The idea is to work with this beam during the Es season only. The antenna is fed with 2x quarterwave pieces of RG-213 + Pawsey stub wire as described on ur site. Again when using the 50MHz yagi all steppir elements are retracted.

when I tested the 5 element in the backyard, SWR was perfect.
Now up in the air SWR of the beam is as follows (measured with my MFJ-259B):

this is not bad I think.

Though (of course) it is impossible to do a 1 to 1 comparison between the steppir en the G0KSC yagi I am sure the F/B ratio of the G0KSC is better. It is difficult to say something about the gain but I have had absolutely no problem with stations not hearing me.

I add a few pictures of both test and operational antenna. Note that the HF part of the beam points north and the 6m beam points south. This fitted best.